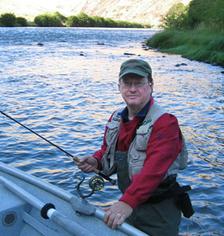 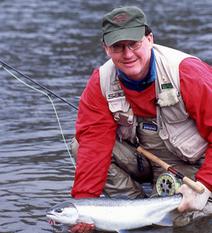 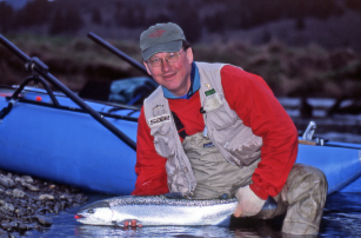 I grew up in central Pennsylvania fishing for trout and bass and hunting for both small and big game. I continued fishing and hunting during my ten years of college and graduate school. After earning my PhD. from the University of Maryland, I was hired by the University of Washington in 1975. I caught my first steelhead that year in the Samish River and established an instant affection and respect for wild steelhead.

The fishing in the Northwest was so magnificent that I quit hunting, bought a boat, a canoe, and a river raft, and began fishing year round. I guided on Alaska's Kenai River during summers in the early 1980's and caught my first steelhead on a fly in the mid-1980's.

I began my freelance writing and photography career in 1986 and have published over 300 articles and numerous photographs in a wide variety of adventure, travel, and outdoor magazines. I am a member of the Society of Environmental Journalists and a past columnist for Salmon Trout Steelheader and Northwest Fly Fishing. My most recent book, Fly Fishing Pioneers & Legends of the Northwest (2006), won the Outdoor Writers Association of America's Excellence in Craft Award for the best book in 2007. I am also a popular speaker for fly fishing clubs and do several presentations a year.

Conservation has always been important to me. I have served as president of the Northshore Chapter of Trout Unlimited and vice president of the Washington Fly Fishing Club (WFFC). I am also a member of the Federation of Fly Fishers Steelhead Committee and won the WFFC's Tommy Brayshaw Award in 2004 for my conservation work.

I became involved with the Wild Steelhead Coalition (WSC) in 2001 when I was invited to become a trustee. I became the WSC's second president soon thereafter and served as past president until 2010. I continue to serve as a WSC trustee. I am currently Professor Emeritus of medical history in the School of Medicine at the University of Washington in Seattle.